We spent the first two weeks of August off the Elliot Highway near Fairbanks, Alaska trying to hunt down a moose. Both boys were fortunate enough to draw tags for a Youth Hunt.  But due to usually wet weather, the moose were not down low in the valleys. The extra rain made it impossible to cross the rivers safely to get to the high country.

So, we spent the rest of our time hanging out with our wonderful friends who are like extended family and picking blueberries. And let me tell you….there were blueberries.  Everywhere!!!  I should have took a picture of the tundra covered with low bush blueberries, but was to engrossed in my picking.  Not only were there blueberries, but beautiful bright red low bush cranberries and black crow berries. I brought home 37 cups of blueberries and our friends froze 8 gallons.  These were picked in a little over 3 hours.

I decided to make Jam from ours and didn’t want to use commercial pectin.  I headed to my Little House Cookbook for a recipe. As you can tell is well loved and used.

First, I washed the berries and put them in my 12 quart pan.  You can see the few low bush cranberries I picked.  They were so pretty it was hard to leave them on the bush till they are ripe.  Their bitterness will add pectin to my jam and help it to set up. The book recommends that you pick 50% ripe fruit and 50% green to have plenty of pectin.  My berries were all very ripe. 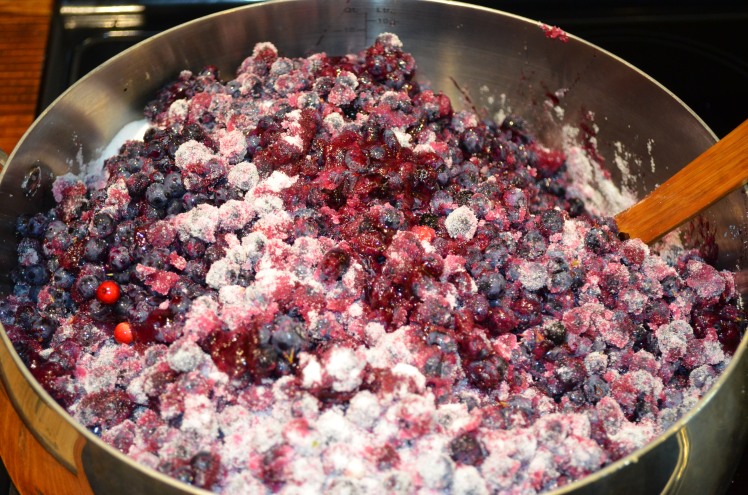 Because I have 16 lbs of berries, I added 12 lbs of sugar.  This worked out to be around 24 cups. The cookbook states a pound per pound ratio is best, but after doing a little research online, I thought I’d try a 3:4 ration of sugar to berries.

For a few years, I was a Tupperware consultant and purchased the pan and many others that you see.  It was an investment, but one I never regret.  I LOVE my pans!

You want to cook the berries over medium to high heat, but be careful not to burn or scorch them.  The key is to get it to a boil quickly to evaporate off the moisture and not kill the pectin. The longer you have to cook the jam the less natural pectin you will have.  I made the mistake of slowly bringing my jam to a boil.  It tastes wonderfully, but is just a little thinner than I would like.  It took me about three hours to boil down my jam.  You want to cook the jam until it reaches 222*F or passes the sheeting test.  I watched a few videos online about testing for sheeting and did not have much success at it.  I would really like to perfect this method for the future.  In the days of Laura Ingalls, they did not have handy candy thermometers to make sure there jam was at the right stage for setting up.

While the jam was boiling down, I put the lids and bands in a saucepan and boiled them. 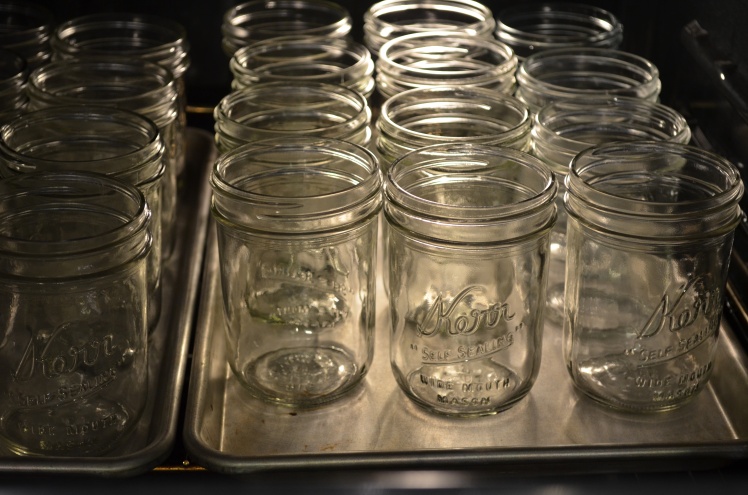 I also put the jars in the oven on the keep warm setting which happens to be 180*F on my oven.  This brought them up to temperature for adding the jam and also sterilized them.  I had wash the jars in the dishwasher the day prior as well. 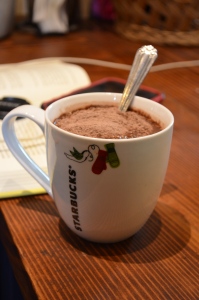 Don’t forget your cup of hot chocolate!  Making jam made it seem like fall, so I had me a cup.  Not a coffee drinker, but received this cup for a Christmas gift and it’s one of my favorites. 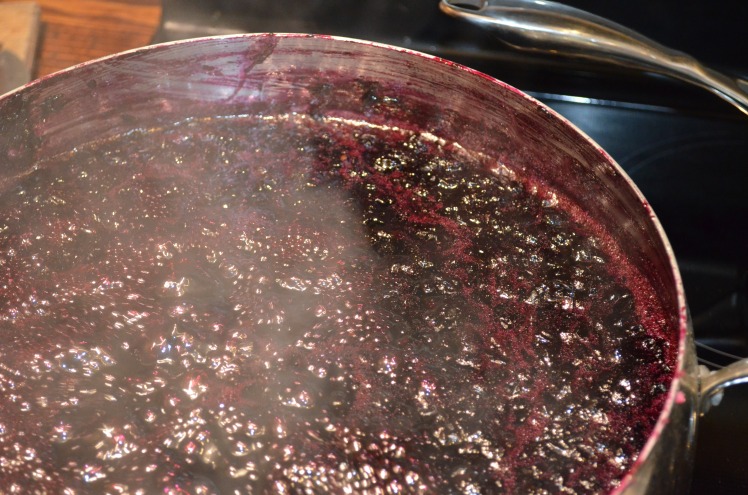 Once the jam has boiled down and is ready, either by checking with the sheeting technique or 222*F, you can put it into put in the jars.  I noticed on my jam that on the edges of the pan it created a thin layer which was hardening when it was ready. 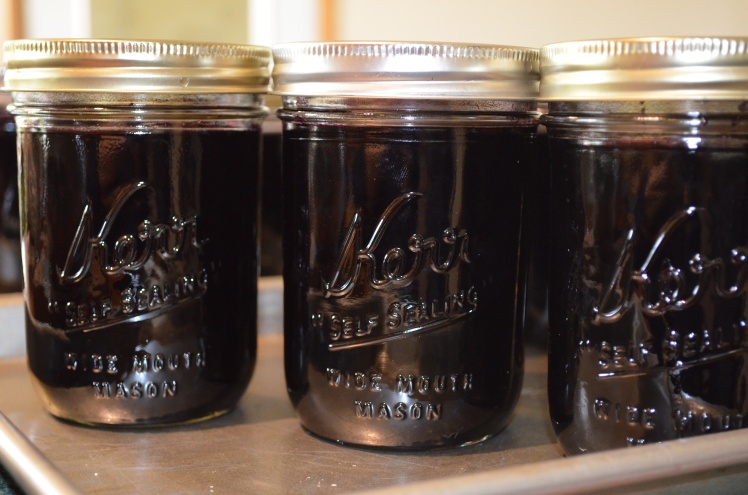 Fill the jars to about 1/4 inch of the rim.  I prefer to fill it just below the bands.  Using a cup measure to scoop into the jars and a funnel seemed to work pretty well.

Place the jars in the canner which has been brought to a boil and simmering.  Cover and simmer for 10 minutes.  Whala!  Your jam is done.  You can hear the gasses expanding in the jars at the beginning of the canning process and once you pull off the lid of the canner and place them on a towel or rack to cool again, the jars will click as they seal.  Be sure to label your jars.

I now have 18 beautiful pints of jam sitting on my pantry shelf!